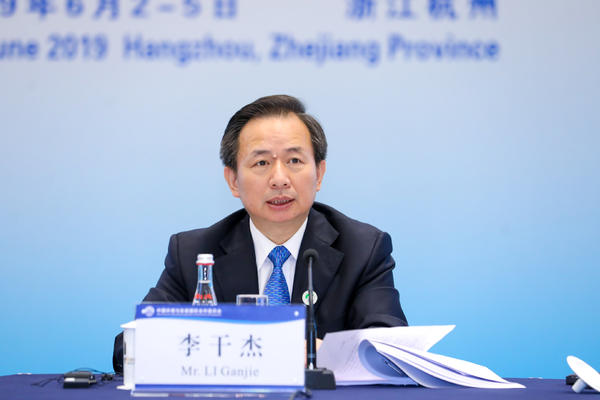 Li Ganjie, minister of ecology and environment and executive vice-chairperson of the China Council for International Cooperation on Environment and Development, speaks at the annual general meeting of the council in Hangzhou, Zhejiang province, June 3, 2019. [Photo provided to China Daily]

Li Ganjie, minister of ecology and environment and executive vice-chairperson of the China Council for International Cooperation on Environment and Development, made the remarks on Monday while addressing the annual general meeting of the council in Hangzhou, Zhejiang province.

"It has been proven by the country's practices high-quality economic development is strengthened by ecological and environmental management in the new era," Li said. He added a total of at least 114.4 billion yuan ($16.6 billion) was invested to treat black and odorous water bodies in key urban areas in the country in 2018.The shift from bulk coal to natural gas and electricity as heating sources in northern China also promotes consumption and investment.

In 2018, China saw investment in ecological protection and environmental rehabilitation increase 43 percent year-on-year, which is much higher than growth in many other sectors, he said.

"From this point, the contribution from the environmental protection sector to economic development has been increasing, and the sector has been a new highlight in China's economic growth," he said.

He said the Chinese government has always attached great importance to ecological progress and environmental protection. "President Xi Jinping came up with the philosophy lucid waters and lush mountains are invaluable assets in his visit to Anji county in 2005, when he was Party chief of Zhejiang province."

Since the 18th Communist Party of China's National Congress in 2012, ecological progress has been at the top of the Chinese government's agenda and great importance has been attached to green development, he said.